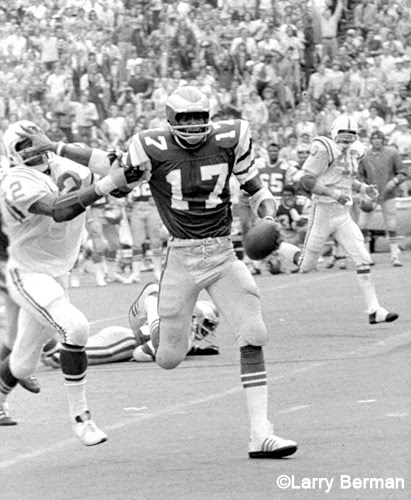 
Lee Harold Carmichael was a seventh round draft choice of the Philadelphia Eagles in the 1971 NFL Draft. He was the 161st player chosen overall.

Carmichael attended Southern University in his collegiate career. While starting all four years at wide receiver, he never led the Jaguars in receptions.

Allen Jubilee Dunbar led Southern in receptions for two of those seasons, and he would go on to be a third round draft choice by the San Francisco 49ers in the 1972 draft. Though he did not make the team, Dunbar averaged over 19 yards on 23 receptions for the New Orleans Saints the next year. He was out of the league the following season, after playing with the Cleveland Browns.

Carmichael was named All Conference and All American in his senior year, while also serving as the team captain.


The Eagles decided to move Carmichael to tight end for his rookie campaign, starting in six of the nine games he played. He led all Eagles tight ends with 20 receptions, which was the fourth most on the team that year.

He was then permanently moved to wide receiver the following season, and he started in five of the 13 games he appeared in. He caught another 20 passes, and scored the first two touchdowns of his career.

The 1973 season saw Carmichael establish himself as one of the top receivers in the league. He led the NFL with 67 receptions for 1,116 yards. His 79.9 receiving yards per game also led the league, which are all career best marks. While scoring nine times, he also ran the ball a career high three times for 42 yards and was named to his first Pro Bowl team.

The Eagles struggled to find a steady quarterback over the next three seasons, and Carmichael suffered somewhat because of this. He caught 147 balls over that time, along with 20 touchdowns, but his yard per catch average never exceeded 13 yards over that time.

Ron Jaworski was named the starting quarterback for the 1977 season, and provided much needed stability for the team. Carmichael averaged 14.5 yards on 42 receptions, along with seven scores, while helping break in the young signal caller.

He averaged a career best 19.5 yards on 55 receptions the next season, gaining 1,072 yards and scoring eight times. He was named to his second Pro Bowl as well, an honor he would attain in each of the two following seasons.

Carmichael caught 100 passes over that time, averaging 17 yards a reception, and scored 20 times. His 11 touchdowns in the 1978 season was a career high.

The 1980 season was special to many Eagles and their fans. The team would win the NFC crown, and appear in Super Bowl XV. Carmichael was a key member of that team. Though Philadelphia lost to the Oakland Raiders in that game, he led led the team with six receptions for 91 yards.

He followed that year up by gaining 1,028 yards on 61 receptions, along with six scores, in the 1981 season. He also caught a pass for a career long 85 yards.

The NFL went on strike in the 1982 season, and this event cut into Carmichael's production. He was on his way to having another stellar year, catching 35 balls and scoring four times.

The Eagles then released him after the season completed.

He joined the Dallas Cowboys the next year, and caught one pass for seven yards in the two games he suited up for. Carmichael then decided to retire from the game.

Harold Carmichael's name is all over the Philadelphia Eagles record books. His 180 games played with the club is the most ever. He is still on top of the teams list for most receptions, reception yards, and receiving touchdowns for a career. He is still ranked 12th in receiving yards for a season, and 18th for receptions in a season.

Carmichael once held an NFL record by catching a pass in 127 straight games, and ranked sixth all time in league history in career receptions at the time of his retirement.

His 590 receptions still rank as the 53rd most in league history, his 8,985 receiving yards is the 42nd most, and his 79 total touchdowns is the 48th most ever.

Harold is also well known for his off the field accomplishments in community work. He was named the 1980 NFL Man of the Year, the Jacksonville Pro Athlete of the Year, and the New Jersey General Assembly Man of the Year.

I have wondered, through the years, why Carmichael has not been inducted into Canton yet. Looking at his statistics, one might consider him a fringe prospect. If you look beyond that, you can easily see he is worthy.

Carmichael was the target on every down the Eagles dropped back to pass. Not only because of his enormous size, but because of his sure and steady hands. His long strides often got him far into enemy territory, as one can see by his 15 yards per catch average over his career.

He was much more than a very dangerous red zone threat. He was tough, and an excellent blocker. His battles with Pat Fischer, another CCC profilee, are legendary. Those two men would spend several Sunday's putting welts on each others bodies.

Carmichael had to achieve his successes in an era where the ten yard chuck rule was in play, making it much more difficult to get open. Cornerbacks then were much more adept at man to man coverage than they are in these times. A receiver not only had to get open then, but he had to literally fight his way to the spot on the field where a ball was to be thrown.

Harold Carmichael has joined a long list of many of his contemporaries. This list is of forgotten players on a forgotten era by a society today that has little to no idea of the path paved to present time. Many of the Hall Of Fame voters never saw Carmichael play, nor the era he played in.

You will see inferior players inducted before Carmichael most likely. Men who benefited from the five yard chuck rule, the offensive linemens ability to hold, as well as the defenders inability to hit anyone like they used to.

It is more than a shame. It is a disgrace. Harold Carmichael certainly belongs in the Pro Football Hall Of Fame, but time and opportunity for his respect trudge onward into obscurity.