Grover Conner Emerson joined the Portsmouth Spartans in 1931 because the NFL did not institute a draft until 1936. Emerson attended college at the University of Texas, but had to leave school before his senior year. He had participated in two plays as a freshman, which was against NCAA rules then. He is a member of the Texas Longhorns Hall of Honor.

Emerson signed a contract for $75 a week to play with the Spartans. He stood out immediately, where he was known for being excellent in run blocking especially. Emerson was also an exceptional defensive tackle, playing both ways like most players did back then.

The Spartans took on the Chicago Bears in a playoff game which took place indoors in 1932, the first of its kind for both an indoor game and playoff game. Emerson was thought to have stopped Hall of Famer Bronko Nagurski's game-winning touchdown pass, but the controversial score was allowed.

This game led to the NFL adopting their own rules on the forward pass, instead of the college rules they had followed. The league then moved the goal posts, kept play within the hash marks, and divided the teams into two divisions because of the influence of this game.

The 1932 season was the first of six consecutive years that Emerson would be named First Team All-Pro. He was not only a bruising tackler, but he was a fast and athletic offensive lineman who could either use his strength or technique to overwhelm an opponent.

He blocked for Hall of Famer Dutch Clark, who had joined the Spartans the same year Emerson did. The team was a powerhouse during their careers, often placing at the top of the league in both offensive and defensive categories.

Besides Clark, the Spartans had other excellent running backs in Father Lumpkin and Glenn Presnell. The 1934 team moved to Detroit and renamed themselves the Lions.

That 1934 squad played 13 games because the fledgling Saint Louis Gunners went defunct after three games and the expansion Cincinnati Reds stopped play after eight games in their inaugural seasons.

The 1935 Detroit Lions, led by the great play of Emerson on both sides of the trenches, won the franchises first NFL title. On that team was a rookie fullback named Buddy Parker, who would later become the Lions head coach and lead the team to a pair of titles in the early 1950's.

Detroit's 1936 season saw them set an NFL record by piling up 2,885 yards rushing that season. This record stood for 36 years until the undefeated Miami Dolphins surpassed it in 1972.

Emerson was named First Team All-Pro for the final time in 1937, then surprised the team by retiring at the end of the season despite being just 30-years old. He had taken a job to become an assistant coach for the Dodgers because Lions head coach Potsy Clark, the only head coach Emerson played under in the NFL, had just left Detroit to take the Brooklyn job.

The Dodgers had seven rookies starting, so Clark wanted to do a better job protecting Hall of Fame quarterback Ace Parker. Though Emerson had been teaching future Hall of Fame tackle Frank "Bruiser" Kinard the tricks of the trade, Clark asked him to suit up as well.

Emerson played the entire season while doubling as the line coach for the Dodgers. He then decided to retire as a player after that year. When Clark was fired after the 1938 season, Emerson and the rest of Clark's staff was let go as well.

While working with the Ford Motor Company, he also was an assistant coach at Wayne State University. World War II broke out in 1942, so Emerson enlisted in the Navy. He rose to the rank of Lieutenant Commander on an aircraft carrier, which would be sunk by the enemy off the Canary Islands.

Emerson survived and returned to the United States to finish his services until discharge. He later decided to become a high school history teacher and football coach for over 20 years after having spent six seasons as an assistant coach with the Longhorns.

The six First Team All-Pro nods that Emerson accrued are the second most in Lions history, tied with Hall of Famers Jack Christiansen, Barry Sanders, Lou Creekmur and Dutch Clark. He leads all Lions guards in this category as well.

Not only is he a member of the Lions All-Time Team, Emerson is a member of the NFL's 1930s All-Decade Team. Of the 11 linemen selected on this team, just four have been inducted into Canton.

His exclusion for the Hall of Fame is a case of time passing and putting the memories of Emerson's greatness in the distance. While being a war hero and excellent coach, he was one of the best NFL players of his era.

It is most likely a fact that there aren't few Hall of Fame voters, if there are any at all, who know who he was. It is doubtful any were even alive when he played. Yet the seniors committee of the Hall of Fame has the lone job of not forgetting the past and reminding us of it.

There is no question that Ox Emerson is the greatest guard in Detroit Lions history, as well as one of their finest defensive tackles. Though he is no longer alive to enjoy his deserved induction into Canton, it is time to make him a member of the Pro Football Hall of Fame.

Ox is on the far right, standing 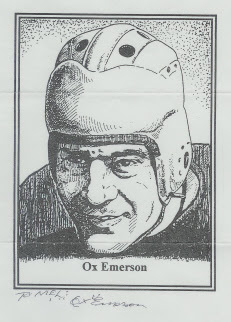 Palmer Edward Retzlaff was drafted in the 22nd round of the 1953 draft by the Detroit Lions, where he was the 265th player chosen overall. He attended college at South Dakota State University after spending a year at a community college in his home town.

While with the Jackrabbits, Retzlaff was also a record-setting track star who twice won NAIA championships in both the shot put and discus. As a football player, he played fullback and set a school record by running for 1,053 yards in his senior year.

Despite all of his accolades, he never caught one pass as a collegiate athlete. Retzlaff is a member of the SDSU Athletic Hall of Fame.

The Lions cut Retzlaff in training camp, so he went back to college and worked as an employee of the school for a year. He then enlisted in the United States Army for almost two years before coming back to again try out with the Lions.

Detroit sold his contract to the Philadelphia Eagles in 1956, where he would spend the first two seasons of his career as a reserve fullback. Though he did not have a rushing attempt over that time, the Eagles coaching staff noticed his excellent receiving skills.

Moved to wide receiver in 1958, Retzlaff exploded onto the NFL scene. He went to his first Pro Bowl after leading the team with 56 receptions. After a solid 1959 season, Retzlaff became part of Philadelphia lore.

The 1960 season is the last year the Eagles have won an NFL title. There were eight Pro Bowlers on that squad, which included Retzlaff, and four future Hall of Famers in Norm Van Brocklin, Sonny Jurgensen, Tommy McDonald, and Chuck Bednarik.

While all three Eagles receivers went to the Pro Bowl that year, Retzlaff led the team in receptions and receiving yards. He would catch 80 passes over the next two years, but he got hurt in 1962 and missed six games.

The Eagles asked Retzlaff to move to tight end in 1963, where he excelled immediately. Making the Pro Bowl until the 1965 season, he led the team in receptions and receiving yards each season.

The 1965 is considered by many his finest year in the NFL. Retzlaff set career best marks of 66 receptions for 1,190 yards and 10 touchdowns. Not only was he given his only First Team All-Pro nod, Retzlaff was the recipient of the Bert Bell Award for NFL player of the year.

He was 35-years old in 1966, an advanced age for an NFL tight end. Despite having another productive season, Retzlaff decided to retire at the end of the season.

Dubbed "The Baron" and "Pistol Pete" by his teammates, Retzlaff bled the Eagles colors. He loved his peers so much, he was the second ever National Football League Players Association president.

He was also the second general manager in Eagles history. Not only has the franchise retired his jersey number, Retzlaff is a member of the Eagles Honor Roll.

Retzlaff still ranks second in Eagles history with career receptions and receiving yards. He also ranks fifth in touchdown catches. His five Pro Bowls is tied with McDonald and Mike Quick as the second most ever by a Philadelphia receiver.

Philadelphia got real lucky Retzlaff came along when he he did. Pete Pihos, the legendary Hall of Fame end of the Eagles, had just retired in 1955. Buck Shaw and his coaching staff also deserve credit for switching his position.

His experience as a fullback made him an exceptional blocker and a threat once he caught a pass. Retzlaff averaged over 16 yards per catch in his career, never averaging less than 15.4 yards in the last eight years of his career.

While the spectacular and diminutive McDonald got most of the press, which was also shared with Pro Bowl tight end Bobby Walston, Retzlaff was consistent. He led the Eagles receptions six times throughout his career.

Not only could he split the seam of a defense by being a deep threat, Retzlaff went and got the tough pass over the crowded middle of the field. He missed just 12 games in his career, showing the toughness and durability he exemplified.

His was a career appreciated by Philadelphia, yet underrated by the league and media. His peers thought enough of Retzlaff to vote him onto five Pro Bowls, but perhaps his serving as an NFLPA president held back further accolades.

He was not named to an NFL All-Decade Team, most likely because he began to excel in 1958. It should also be noted these teams had no second units to vote for until the 1970s team. If the 1960s team had one, it is likely Retzlaff would have been placed on it.

The question of a quota could be the reason Retzlaff has not been inducted. While seven of his teammates went on to Canton, there is no doubt Retzlaff and his teammate Maxie Baughan also should have been inducted long ago.

Time tends to forget greatness as it marches on. Retzlaff is among a slew of legendary receivers who belong in Canton over modern players who benefit from rules helping to improve their abilities.

Maybe the seniors committee of the Hall of Fame will one day be allowed more than two candidates annually, thus allowing deserved players like Pete Retzlaff to obtain their rightful respect. 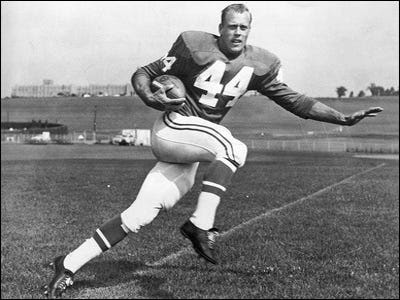 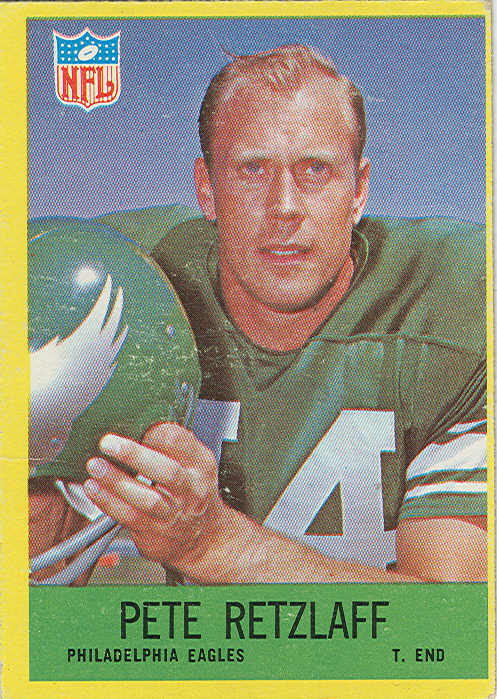 Posted by Crazy Canton Cuts at 10:03 AM No comments: