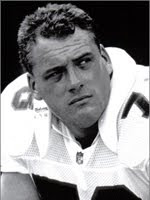 Michael Lee Kenn was drafted in the first round of the 1978 NFL Draft by the Atlanta Falcons, where he was the 13th overall selection. Kenn attended college at the University of Michigan under legendary head coach Bo Schembechler, where he was twice named All-Big Ten and helped lead the Wolverines to three Big Ten championships and three bowl appearances

He started right away as a rookie for Atlanta and quickly established himself as a premier NFL left tackle. Kenn was named First Team All-Pro in 1980, as well as making his first Pro Bowl. He would make the Pro Bowl five straight years until 1984.

Kenn missed a career high five games in 1985, but he was durable and reliable. He missed just 10 contests in his entire career, never missing a start when he did play. Though Kenn was named First Team All-Pro by the Pro Football Writers Association in 1983, as well as First Team All-Pro by most everyone in 1991, he was underrated.

A big part of this reason was due to the struggles the Falcons endured most of Kenn's career. Atlanta made the playoffs just four times his his 17 seasons, winning two postseason games total. The Falcons won their division just twice over that time.

His 252 starts and games played are both team records for the Falcons. With a franchise that has noted players throughout history like Van Note, Tommy Nobis, Claude Humphrey, William Andrews, Gerald Riggs, George Kunz and Hall of Famer Deion Sanders, Kenn is rated the Falcons top player by approximate average.

Kenn is a member of the Falcons Ring of Honor. His five Pro Bowls is tied for the second most in team history with Kunz, Van Note, Nobis, Jessie Tuggle and Keith Brooking. His two First Team All-Pro nods is tied with Humphrey, Fralic and Sanders as the most in team history.

Atlanta has not had a better left tackle than Kenn. He was sometimes overshadowed by Hall of Famers Anthony Munoz and Gary Zimmerman for First Team All-Pro nods for left tackle, as well as Pro Bowler honors to players like Joe Jacoby, Jimbo Covert, Pat Donovan, Luis Sharpe, Jim Lachey and Lomas Brown.

Make no mistake that Kenn was as good a left tackle as anyone to ever play professional football. While able to open huge holes for Andrews and Riggs in the run game, he was nimble and athletic while pass protecting.

He may not be deemed a sexy choice for induction into the Hall of Fame by some, but it is a disgrace he hasn't even been named a semi-finalist in any year he has been eligible to go into Canton. It as if the voters are penalizing him for the Falcons woes. This same argument can be made for deserving candidates like Humphrey, Nobis, Van Note and Kunz.

But if you just shine the spotlight on the playing abilities and accomplishments of Mike Kenn, it is easy to see he is worthy of induction into the Pro Football Hall of Fame.

Posted by Crazy Canton Cuts at 8:00 AM No comments: