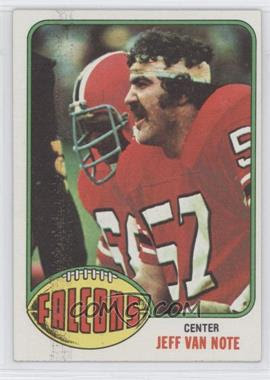 Jeffrey Aloysius Van Note was an 11th round draft pick of the Atlanta Falcons in 1969. He was the 262nd player picked overall. Van Note would go on to play his entire 18-year NFL career as a center for the Atlanta Falcons from 1969 to 1986. After beginning his college career as a fullback, Van Note then moved to defensive end at the University of Kentucky. Van Note earned 2nd team All SEC honors in his sophomore year. He was named Kentucky's team MVP his senior year. He was drafted as a linebacker.

Van Note was soon moved to Center by Falcons NFL Hall of Fame head coach Norm Van Brocklin. Van Note eventually became an upper echelon Center in the NFL. His 18 NFL years is amongst the top 25 longest in NFL history and is the second longest while staying with the same team. He played in 246 games over this stretch, and his 225 games started is second in Falcons history to. Van Note only missed four games in his entire NFL career.

Jeff Van Note played in an era full of excellent Centers in the NFC. Tom Banks, Rich Saul, Len Hauss, Forrest Blue, Ed Flanagan, Mick Tingelhoff, Jay Hilgenberg, and Doug C. Smith were all multiple Pro Bowl Honorees during Van Notes era. Jeff made 3 straight Pro Bowls from ages 34 to 36. He was an athletic, strong, and technically sound player. He languished on some bad teams, but was one of the players the Falcons could rely on week in and week out for many years. His name was constantly bandied about as one of the NFL's top Centers during his career. His status as a fan favorite exemplifies this. Many great offensive lineman languish in anonymity. The Falcons had flashy players like Tommy Nobis, White Shoes Johnson and Steve Bartkowski, but Van Note is the guy most Falcon fans say symbolize the franchise best. He may not be the greatest Center who ever played, but he is certainly amongst those mentioned as one of the greats. Jeff Van Note should be inducted into Canton.

The Beeze (aka: Tim McNeeley) said...

Yet another O-Linemam getting screwed.

If you don't play a glory position or on a dynasty, you get overlooked. Sad but true.