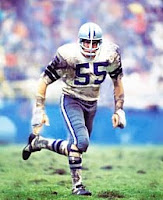 
Lee Roy Jordan was the Dallas Cowboys first draft pick of the 1963 draft. He was the sixth player chosen overall. Jordan was already a gridiron legend in college, after a spectacular career at Alabama University. He started as soon as he was eligible as a sophomore (freshmen were not allowed to play varsity sports during that time), and was the MVP of the 1960 Bluebonnet Bowl. The Crimson Tide won the national championship behind Jordan's leadership, then went 10 - 1 in his senior year. In his last game with Alabama in the Orange Bowl against Oklahoma University, Lee Roy piled up a whopping 30 tackles and was named the games MVP. Lee Roy Jordan is a member of the Alabama Hall Of Fame and the College Football Hall Of Fame.


Lee Roy only suited up for seven games in his rookie year, but started each game at Outside Linebacker on the left side. He ended up swiping three interceptions and recovering a fumble. Jordan would pick off one pass the next year, then none the following season. He was moved to Middle Linebacker in 1966 and would stay there the rest of his career. This was the time the famous "Doomsday Defense" was at its beginnings, and Lee Roy was the leader. He picked off one pass that year and returned it 49 yards for a score. Lee Roy had 3 interceptions the next year for a career best 85 yards, while scoring another touchdown and recording a safety. The Cowboys would end up making it to the 1967 NFL Championship Game before losing to the Green Bay Packers in the famous "Ice Bowl". Lee Roy was named to the first of three consecutive Pro Bowls that season. Jordan had 3 picks in 1968, then 2 the following year. After getting an interception in 1970, Jordan ended up playing in Super Bowl V, the first Super Bowl after the NFL/ AFL merger. The Cowboys ended up losing in the waning seconds to the Baltimore Colts in a game dubbed "The Blunder Bowl" because it was a game that featured 11 turnovers by both teams and 10 penalties against Dallas. Lee Roy had 2 interceptions in 1971, and a career best 3 fumble recoveries. The Cowboys would go on to beat the Miami Dolphins 24 - 3 in Super Bowl VI. It is the only Super Bowl where a team was prevented from scoring a touchdown. Jordan had 2 more swipes in 1972, then had a career high 6 interceptions in 1973. In one game against the Cincinnati Bengals at Texas Stadium, Jordan picked off 3 passes in a five minute span. He took one ball for a 31 yard touchdown, and was named to the Pro Bowl after the season. Lee Roy made his final All Pro Team in 1974, after having 2 interceptions. 1975 saw Jordan tie his career high of 6 interceptions, while leading the Cowboys to Super Bowl X. The Cowboys ended up losing a close game to the Pittsburgh Steelers. Jordan again started every game in 1976, but did not record any turnovers for only the second time of his career. He then retired after that season as the franchises all time leader in tackles, and his 32 interceptions are still tied for the third most ever by a linebacker in NFL history. Lee Roy Jordan is a member of the Cowboys Ring Of Fame.


There are a few theories as to why Jordan still awaits his call to Canton. One is that he was a member of a fantastic defense that featured Hall Of Fame Defensive Tackle Bob Lilly, along with such greats as George Andrie, Chuck Howrey, Jethro Pugh, Charlie Waters, Cornell Green, and Cliff Harris. Then there is some that say is was because of the genius diagramming of Hall Of Fame Coach Tom Landry that the "Doomsday Defense" was so effective. Others believe that the voters have some anti-Cowboys bias from that era as well. Maybe all those points have some validity, but you cannot ignore the facts that Jordan has placed in front of all to see through his play on the field. He was a true leader who always gave it everything he had on every play without fail. Not only was he a tackling machine, but the man helped get the ball back for his teams offense over 50 times in his career. Jordan gathered a turnover in every 3.72 games he played in his career, an outstanding percentage. His three interception game was named one of the ten most memorable moments in the history of in Texas Stadium in 2008. Not a big man in size or stature, Jordan's heart was immeasurable, and he was one of the top linebackers in the NFL almost every year that he played. When you see the late Derrick Thomas of the Kansas City Chiefs inducted, though deservedly so, it can make one wonder. Thomas was known for just rushing the passer, and was not the complete player that Jordan was. Lee Roy Jordan certainly is deserving of being inducted into the Pro Football Hall Of Fame.

another sweet write up CCC. awesome history lesson for me, i'll have to pass this on to "cowboy"!