Those who may follow this blog know that it pays tribute to Professional Football Legends yet to be inducted into the Pro Football Hall Of Fame.

You also may be aware my first entry into this blogs series is of CHRIS HANBURGER.

It is my personal mission to get Hanburger into Canton, and this has been spotlighted in the Washington Times.

I have decided to ratchet up my efforts.

I am PLEADING for YOU ALL to sign my petition:

Your e-mail will NOT be displayed, and you can check off a box to not be bothered further.

PLEASE SPREAD THE WORD TO YOUR FRIENDS ALSO AND GET THEM TO SIGN AS WELL!

I would TRULY APPRECIATE it.


Christian G. Hanburger was an 18th! Round draft choice of the Redskins in 1965. He was the 245TH! player chosen that year. He was a 25 year old rookie, due to his service in the Army before going to the University of North Carolina. At UNC, he was a 2 way player who was named All ACC at Center his junior and senior years. In 1963, his team won the ACC Championship.

Hanburger played right away and was in the Pro Bowl by his second year in the league. He would then begin a string of Pro Bowl appearances until 1969. He then resumed that string in 1972 until 1976. Sacks and tackles were not recorded in those days, but Hanburger was a play maker. He is considered one of the best of his era. He was known for his blitzing ability and pass coverage. Ever the complete player, he returned 3 fumbles for touchdowns in his career to go with 2 on interceptions. In 1972, Hanburger captained the Over The Hill gangs defense to a Super Bowl appearance. Hanburger was known not only for good speed, but his exceptional quickness. He had the innate ability to diagnose a play before the ball was hiked. He often would cover the other teams tight end and peel off to knock passes down meant for wide receivers. Coach George Allen liked to have a safety first defense, leaving the rest to Hanburger and his fellow linebackers.

Chris Hanburger's nine Pro Bowl appearances are still the most by any player in the entire history of the Washington Redskins.

The game was played different for the most part in his era. The running game was most teams primary weapon. Tackling with sound fundamentals was a must then. Few players lead with their heads for "kill shots" because they would be injured much faster than today with innovations of modern technology on equipment nowadays. It also should be remembered that players then did not command the same level of salaries that they do today. Most players would work a second job in the off season, compared to the luxury players have today to train whenever they choose to.

As a kid, I once heard a long time local media type say that he figured Hanburger had over 50 quarterback sacks in his career. This, coupled by the facts that are allowed in the record book truly says that there is NO DOUBT that Chris Hanburger SHOULD BE in the NFL Hall of Fame.


IF you agree with me, then help me wake up the Senior Committee members by e-mailing them along with me and DEMANDING that CHRIS HANBURGER be put into the Hall of Fame. If we all do it, maybe they will stop ignoring the facts! 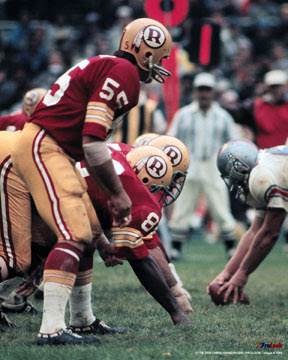 doing it now & going to circulate here & my email list!

BTW, just so u know, i took the email address' off the petition as well, will circulate!

The Beeze (aka: Tim McNeeley) said...

Thanks for letting me know, and its a done deal from me.

signed up and will promote your petition on my blogs

You got it. Keep up the good work

You've got my vote sir!

I agree, give the man his due already Canton.

Hello, CCC, I just linked to this post from my blog. I hope you don't mind that I used your logo.