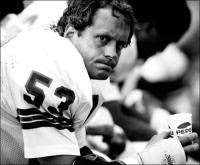 
Randolph Charles Gradishar was drafted in the first round of the 1973 draft by the Denver Broncos. He was the 14th player chosen overall. He attended college at Ohio State University under legendary coach Woody Hayes. Hayes, who sent over 98 players to the professional football level in his Hall of Fame career, called Gradishar the finest linebacker he ever coached.

In his three years as a Buckeye, starting in every game, he set then-school records for 320 tackles in a career and 134 in one season. He was ejected in the 1971 game against rival Michigan University, causing a ten minute brawl after he punched a Wolverine in the face. It happened one play after a famous meltdown by Hayes, where the coach threw a penalty flag and yard marker he had previously destroyed after being thrown out of the game himself.

Denver brought him along slowly in his rookie year, starting just three of 14 games behind veteran Ray May. May was the 1971 NFL Man of the Year and a member of the Super Bowl V champion Baltimore Colts.

He started every game the next year, the last season the Broncos would run a base 4-3 defense during his tenure with the club. He was named to the Pro Bowl after grabbing three interceptions and taking one in 44 yards for a touchdown. He scored once again the following year off of another three picks and had seven quarterback sacks.

Denver went into the 1977 season running the 3-4 defense under coach Joe Collier. With players like Gradishar, Louis Wright, Tom Jackson, Bill Thompson, Reuben Carter, Bob Swensen, Lyle Alzado, and Barney Chavous, the Broncos had one of the most feared defenses in all of football history.

They were dubbed the "Orange Crush", and a soft drink named after them soon became very popular. Five members of the defense was named to the Pro Bowl that year and four were named First Team All-Pro, including Gradishar. They led Denver to a 12-2 record and an appearance in Super Bowl XII. Though they lost the game, the defense left a permanent mark on NFL history with their excellence by allowing just 10.6 points per game that year.

Gradishar may have had his finest season the following year, where he was named NFL Defensive Player of the Year by both the Associated Press and UPI. He also was named the winner of the George Halas Award and Linebacker of the Year by Football Digest. Denver's defense was second in the league in points allowed, and Gradishar was one of five Bronco defenders to go to the Pro Bowl.

Football Digest named him NFL Linebacker of the Year again in 1979 despite not starting in one of the 16 games he played. Other than his rookie season, it was the only game in his career he failed to start. He was once again selected to the Pro Bowl.

Though he failed to make the Pro Bowl in 1980, he did take one interception a career long 93 yards for the last touchdown of his career. He was also named First Team All-NFL by the Sporting News.

Gradishar then made the Pro Bowl the next three years before retiring after the 1983 season. He never missed a game in his entire career, an amazing feat for someone playing such a violent position where he had to give up his body on virtually every play to prevent the opponents from success.

Not only was he durable, very intelligent, quick on his feet, and a big hitter, but Gradishar was also a masterful technician. He had the innate ability to diagnose a play and was seldom fooled. This, along with his foot speed, allowed him to defend just about any opponent on a pass play. This ability allowed Denver the luxury of blitzing their outside linebackers, knowing he could cover their assignments.

His specialty may have been the short yardage situation. With a superb ability to sift would-be blockers, he often filled the holes the opposing running backs would run to. Though he didn't have the toothless snarl of Jack Lambert or easily seen nastiness of Dick Butkus, he was just as good as those two Hall of Famers.

Some of the best running backs in NFL history, Walter Payton and Tony Dorsett, are on record espousing his tremendous hitting ability. "The chance for a real good shot comes very seldom, but when it's there I take full advantage of it." Gradishar once said.

There have been few linebackers to take the gridiron on his level. He is a member of the Broncos Ring of Honor and Colorado Sports Hall of Fame. Why he has yet to be inducted into the Pro Football Hall of Fame is beyond bewildering. He has been a finalist twice and a semi-finalist four times.

Now he is in a gigantic pool of candidates in the Seniors Committee list. Though he should have long been inducted before he made it that far, he is caught in a quagmire of a selection process where no more than two candidates yearly can just make it to the final vote process.

It would behoove Canton to double that, allowing the Seniors Committee to try to induct at least four each year. The backlog of excellent players is too long, and it is frustrating seeing lesser modern players go in as superior players are caught in a numbers crunch that is much harder to win than a slots machine jackpot.

Watching a player as great as Randy Gradishar wait this long to get his deserved respect truly shows the ineptness of the Canton voter. Though no one can question the recent inductions of linebackers like Andre Tippett, Ricky Jackson, and Derrick Thomas, no one would ever say that any were better football players than Gradishar. Though deserving, it is a travesty the much more deserving Gradishar continues to wait on his rightful placement in the hallowed walls of Canton. 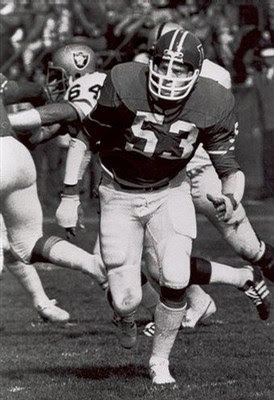 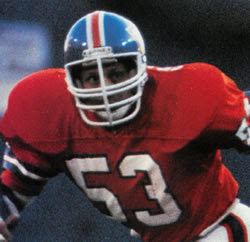 I agree with the comments listed on this site. I graduated a few years behind Randy Gradishar at Champion High School and followed him through his career. I also got to see him play in the State 'AA' Basketball Championship game for the Golden Flashes in Copley, Ohio in the early 70's which had alot of influence on me playing sports. Randy should have been inducted a long time ago. For Woody Hayes to say he was one of the Best if not the Best Linebacker he has ever seen what more do you need ? I remember going into the supermarket Randy's Dad owned and Randy was there. It was before the Champion Golden Flashes AA State game. I asked Randy for a signature he asked for something to sign. I put my hand in my pocket not expecting to see him and I pulled out the first dollar bill I had ever made as I was saving it for something I really wanted. Randy said that will do and signed my dollar. I still have that dollar the first dollar I ever made. Randy Gradishar left a Big Impression on alot of kids when he left Champion High School and alot of players look up to him and still do. Give him his do, he earned it ! Randy haven't seen you in 40 years but, I understand you are in Denver. I never made it out of Champion but doing ok. Wish you the Best..... Art Pierson 1976